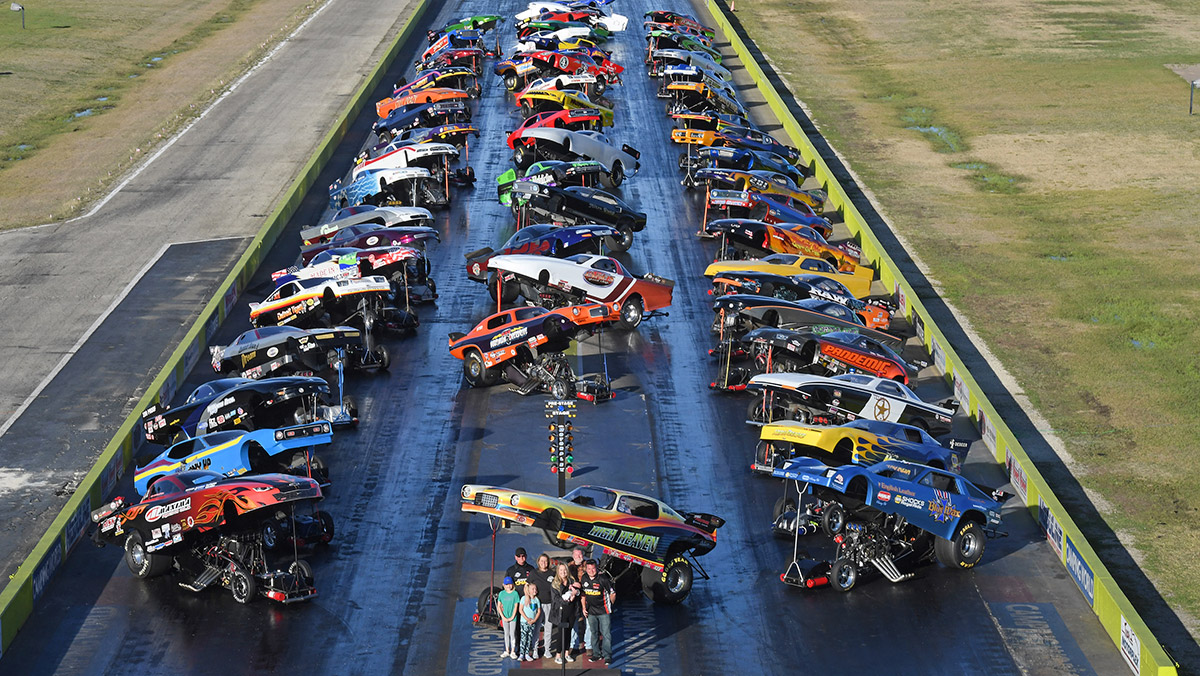 Going to the races

You could say his love of race cars is in his DNA, passed to him from his father and grandfather before him.

Trips to the raceway have been a family affair for years. From the time he could walk, and perhaps even before that, Christopher Graves (’08) accompanied his grandfather to the races.

“I’m very passionate about drag racing,” Graves says. “It was a hobby to [my dad and grandfather], but I was like, ‘I’ve got to find a way to make a living in this, one way or another.’”

And Graves did exactly that. Twice. First, with a successful drag racing photography business for two decades, and now with the popular racing competition tour called Funny Car Chaos.

Before that, however, Graves made a pit stop at the University of North Texas, majoring in General Studies, now known as Integrative Studies, with concentrations in business, sociology and psychology.

“If you can pick the classes you’re interested in, you tend to go to class more often,” Graves says. “So, I was really interested in learning about business, but didn’t want to go super far into it, because I kind of knew, ‘I’m going to be in the drag racing industry,’ but I wanted to get a business education and also a people education.”

Graves says one class in particular had a significant impact on the trajectory of his career, that being an entrepreneurship course through the College of Business. He recalls a lecture about the strategy behind naming a business, and how it needs to “catch the eye and make people remember.”

“I named my business Max Cackle Photography, and I named it in class that day,” Graves says. “Cackle is a term used in drag racing for nitro cars because the noise they make sounds like a cackle. And for the next 15 years, everyone knew Max Cackle.”

Graves’ father was an amateur photographer at raceways, teaching Graves how to use a film camera when he was a teenager. While that camera had light leaks and was held together with duct tape, it was invaluable of Graves’ career.

Graves ran the photography business for nearly 20 years, much of that time with the help of his wife Tera. And you probably don’t need to ask where he and Tera met.

“We met at the race track of course,” Graves says. “Our first date was at the Autorama, which is a car show in Dallas at Market Hall. She was into racecars and her family was into racecars. She started coming with me, taking pictures. I taught her how to use photoshop, and now she’s better at taking pictures and using photoshop than I am. All the racing ties in together, it’s kind of all we do.”

The duo became pros at their photography craft, being able to take, develop, print and sell photos from races within a span of about 20 minutes.

“We were selling photos at the race tracks and also doing freelance journalism for all the drag racing magazines, from National Dragster to Hot Rod Magazine to Car Craft Magazine, so I did that for a long time,” Graves says. “We went to over 50 races a year for 20 years doing that.”

Graves says it was particularly fulfilling to see his and Tera’s work in industry publications, as they were the same magazines he had grown up seeing his dad read.

After years of success in photography, there came a shift for Graves and Tera as they noticed a void in the racing industry. The two organized their first funny car race in 2017 and it went well, prompting them to organize more races in 2018.

Over the course of those next four races, which expanded beyond Texas to Illinois and Missouri, Graves saw that there was a real following for the races they were putting on.

“We knew it was an opportunity for us to transition,” he says. “We were trying to buy a house, we were trying to settle down, talking about having kids and things like that, so this is the moment where we have to decide: ‘Are we going to commit full-time here and put all our eggs in this basket, or play the safe card and just do what we know works?’ So, we thought about it and decided, ‘Let’s just do this.’”

And you bet they did. In 2019, the Graves’ doubled down and put on eight races, with fans coming out in droves. It was also the year the Graves fully transitioned to operating Funny Car Chaos, leaving the photography business in hindsight for now.

“Our whole deal is grassroots and family friendly and Texas is rich with drag racing history,” Graves says. “A lot of these guys have been doing this since before I was born, and they barn-stormed across the southwest with their funny cars and put on shows, just like what I’m doing. But it hadn’t been done in 20 or 30 years, so this kind of brought all of that back.”

Funny Car Chaos continues to expand and change, along with the Graves family. The Graves’ welcomed a son named Levi in March 2022, and the raceway family affair has only continued.

“It’s a whole different experience,” Graves says. “He’s been to three races already. Poor Tera has had her hands full, so I’ve had to take what she’s been doing with the business and kind of handle that myself while she dedicates her time to Levi. It’s been a challenge, but it’s all good.”

Now holding 12 races per year primarily in the South and Midwest, Graves says they have plans to expand Funny Car Chaos toward each coast.

“We’re going to get bigger, it’s just going to take more teammates,” Graves says. “It’s going to be weird if I ever don’t go to one of my own races but the reality of that is coming.”

But Graves’ primary ambition is, and always will be, making sure fans have a blast at Funny Car Chaos.

“The most rewarding thing for me is just seeing people enjoying themselves with the sport,” he says. “I want the sport to be strong and traditional drag racing and funny cars to be strong, because that’s what I grew up watching, and I want it to keep going.”